“When you change the way you look at things, the things you look at change.”
Wayne Dyer
​
​​“In the middle of difficulty lies opportunity.”
Albert Einstein

I was born in Ashtabula, Ohio to Francisco J. Santiago (Utuado, Puerto Rico) and Zola Mae Blankenship (Pikeville, Kentucky). I like to say I’m half Puerto Rican and half Hillbilly. A little bit of country and a little bit of Latin spice. My father was a union man belonging to the Brotherhood of Maintenance of Way Employees for his 42-year career of working on the railroad. From the age of 12, I was raised by my single father. He was a wonderful dad. I lost him to pancreatic cancer at the age of 62 in 2002 and still miss him often.

I saw the many benefits and protections the union fought for by advocating for the maintenance way workers (laborers). For many years of my father’s career, it was a very manual job doing things the old fashion way of slinging the spiking hammer which is like a sledgehammer to drive railroad spikes. They needed the protections that only came because the union fought for them. I graduated from public high school in 1982 and lived in various states in the southeastern part of the United States having obtained a bachelor’s degree from the University of South Alabama in Mobile and a master’s degree from Georgia Southern University in Statesboro. I moved to Pennsylvania in 2000 from West Virginia to get married to a God-loving, awesome, good, kind man and have lived with my husband in Cumberland County in the same house since then.

I have volunteered in many capacities since I have been in Pennsylvania to include being active in my church and volunteering with the National Alliance on Mental Illness (NAMI) Cumberland and Perry Counties' affiliate where I served as board president and for over three years taught the Mental Health First Aid course both the Adult and Youth versions three times a year for the local affiliate. I am a certified QPR (Question, Persuade, Refer) instructor which is a gatekeeper suicide prevention education training and I have taught the training several times. I am also a Copeland Center trained WRAP (Wellness Recovery Action Plan) facilitator and have led groups where individuals with various challenges are assisted in developing their own WRAP to help them on their recovery journey.

I have been active in politics in the county on and off over the last 10 years. For 11 months during 2013-2014, I wrote a weekly political commentary column for The Carlisle Sentinel.  From June 2019 to June 2020 I served as an officer (Recording Secretary) of the Cumberland County Republican Committee. I am a Leadership Cumberland alumnus from 2010. I am a founding member of the Western Cumberland County Republican Club currently serving as Chairwoman.
​
I believe that one should try to “Be well, Stay well, and Give back.” 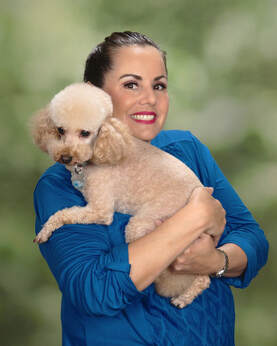 Dog mom Theresa with her fur baby, Noah.
Sign Up for Emails from Me.
“committed to working with [almost] anyone to get good things done.”
Concept from Americans for Prosperity
© Copyright 2020, TheresaMyers.com